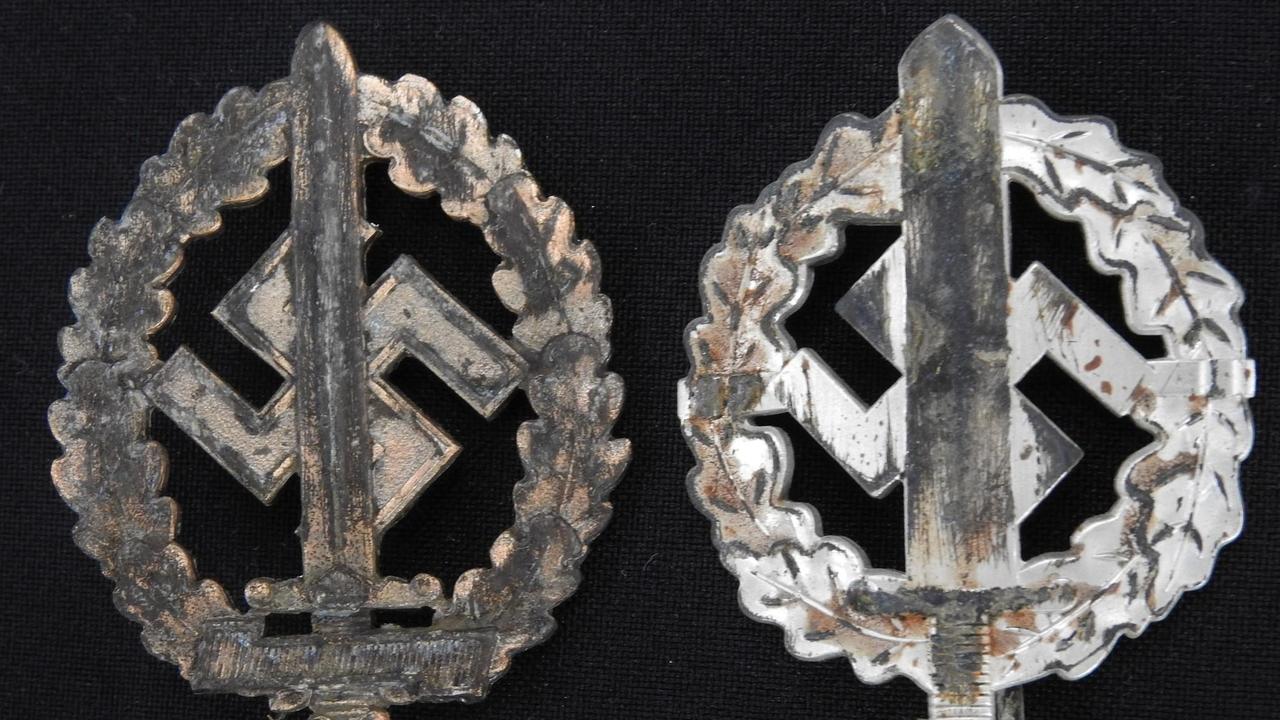 An auctioneer claims to have received more than 100 death threats simply for doing his job, but a spokesperson for the Jewish community says the claims are baseless.

Nazi memorabilia are set to go up for auction at a Gold Coast auction house just days after the Queensland government announced plans to ban the Nazi swastika.

Six lots of Nazi artifacts are being sold Saturday by Danielle Elizabeth Auctions at a collector’s property, sparking outrage in the Jewish community.

The Nazi memorabilia up for auction include various badges, an Adolf Hitler support clip, a set of rank signs and collar tabs of a Luftwaffe general, and a general’s cockade and crown.

Some of the descriptions under the items include “these look good and quirky”, “collectible nazi militaria folks!” and “these are very impressive and in fairly good condition”.

Danielle Elizabeth has continually come under fire for selling Nazi wares, including as recently as last month.

Anti-Defamation Commission Chairman Dvir Abramovich said no one should profit from the proceeds of crime.

“This darkest proceeds of crime profiteering in history is beyond sickening,” Dr. Abramovich said in a statement to NCA NewsWire.

“If Danielle Elizabeth took the time to think about the 1.5 million children murdered by the Nazis, maybe they would think twice about the trafficking in these instruments of death.”

Dr. Abramovich went on to condemn the sale of these items and those who bought them.

“Imagine the anguish Holocaust survivors must be feeling right now. Anyone offering these cursed, bloodstained items profane the memory of the victims and should be ashamed,” he said.

“The Holocaust is over, but the dangerous ideology and culture that fueled the extermination of millions lives on in Australia today. These items may find their way into the hands of the faithful of the Third Reich who will proudly display them in their homes and use them to recruit new members to their dangerous cause.

When contacted for comment, Dustin Sweeny of Danielle Elizabeth said that as an auction house they were employed to clean up deceased estates.

“These World War II military artifacts are not illegal, they have market value and the families in these estates want everything turned into cash for them,” he said.

Mr Sweeney claimed he had received death threats because of the auction.

“The first time we had it I got 136 death threats and had to disconnect our phone for three days,” Mr Sweeney said.

“I tell them this: if they want to stop the global trade in this militaria, they need to change the law, not hit small businesses.”

The Queensland Government announced on Thursday that it will introduce legislation in Parliament later this year to make the public display of the Nazi swastika and other hate symbols a criminal offence.

Prime Minister Annastacia Palaszczuk said it was to send a clear message that Nazism was “evil”.

“Nazism is bad. Evil triumphs when the good do nothing. We will not do anything and let this evil develop,” she said.

“To those who promote these symbols of hate, I say this, your community condemns you and your days of spreading ignorance and hate are over.”

“This announcement is a resounding triumph for Holocaust victims, survivors and our brave Diggers who died to defeat the evil regime of the Third Reich and a defeat for local neo-Nazis who seek to preserve Hitler’s legacy,” did he declare.

But he now wants the government to take strong action against Saturday’s auction.

“We call on the Queensland Government to de-nazify the market and criminalize the sale of these memorabilia to eradicate this grotesque and sinister practice,” Dr Abramovich said.