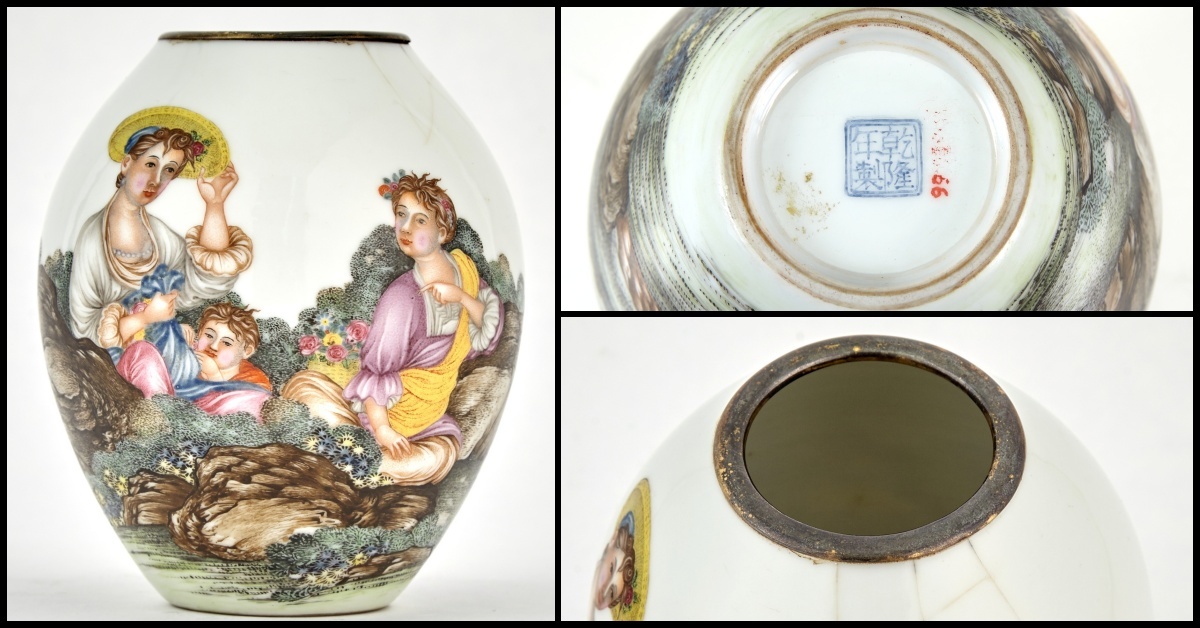 A Porcelain Vase Of European Figures From Partial Chinese Imperial Falangcai, was sold at Doyle Auctions, a local New York auction house. Although the vase is badly damaged and the part above its neck has completely disappeared, it still caused a fierce auction.

The starting price for the vase was US $ 50,000. But after four offers, the price reached 90,000 US dollars. The price then jumped to the $ 1 million mark all at once, which is grossly overkill. 11 more bids were subsequently obtained, and the hammer price rose to US $ 2 million. The hammer price was eventually reached at 20 times the initial estimated value of US $ 100,000. – to 2 million US dollars. With the buyer’s premium, the final price was US $ 2.45 million.

With such an amount, this vase is likely to beat many auction house giants this season and become New York’s Asian Art Week best deal.

Provenance (modified by the value):

This Sarah Belk Gambrell Falangcai vase bears a four-character mark in blue indicating its origin as a product of Emperor Qianlong’s imperial workshop.

European missionaries visited China in the 17th and 18th centuries. This greatly influenced the creations and development of craftsmanship in the Qing imperial workshops – namely porcelain with painted enamel. The craft of painted enamels which continued throughout the three reigns of Kangxi, Yongzheng and Qianlong (1662-1795).

Each porcelain creation has the distinction of applying and firing jewelry-like enamels, then passing Emperor Qianlong’s own inspection. It was exclusively used by the Imperial Family or the Extended Royal Family for appreciation, thus these types of falangcai (“Foreign colors”) were rare.

Of the small number of known extant examples, most are now held by major museums around the world, including the British Museum and the National Palace Museum in Taipei. It was the most expensive and finest porcelain in the Qing Dynasty. Enamel is still preferred by many collectors, and the auction price can reach $ 20-30 million.

All sides of the porcelain vase together

Measuring approximately 12 centimeters in height, the Sarah Belk Gambrell Falangcai Vase is decorated with a continuous scene of two European women and a child in a garden, reflecting Emperor Qianlong’s admiration for European aesthetics. This representation of European figures was not common among painted enamel porcelains.

It reveals in its subject the history of the art of the imperial court of the XVIIth and XVIIIth centuries. In its construction, one can begin to presume the technical and conceptual skill required to create such a graceful 360-degree scene on a crisp olive-shaped porcelain body. Even its visible loss invites us to consider the vase whole and in perfect proportion. It is not certain how the neck of the porcelain vase has been decorated, if at all.

Porcelain vase from Doyle Auction, with a projection of the appearance of the neck of the work of art

The British Museum bottle-shaped porcelain vase, with an ovoid body and also with European figures, is a similar work

The other side of the vase represents a pastoral scene

A prototype falangcai porcelain vase with European figures exhibited in the British Museum as part of the Sir Percival David (1892-1964) collection similarly presents two women in a pastoral setting with a young boy. The Sir Percival David Vase provides the best and closest example from which to imagine the proportion and possible design of the missing Sarah Belk Gambrell Vase neck.

Based on this large vase, we can reasonably assume that the total height of Doyle’s vase should also be at the level of 20cm. As for the neck, it was originally believed to be a straight neck with a slight inward curve and that there were no penetrating ears on the neck. The ornamentation around the shoulders is also of note. It is believed that they are based on the traditional balana and curling leaves. However, under the influence of Western art, the upper layer is more three-dimensional, while the design of the lower layer is simpler.

There are two big differences between Sir David and Doyle Auctions vases:

1. Although both adopt the perspective method similar to that of 18th century European paintings, the environmental motifs of Sir David’s vase are more westernized, like the European-style architecture of the body of the vase.

2. The four character Song style Qianlong Imperial System inside the two crockery circles. Sir David’s vase is a red model, while the Doyle Auctions vase is a blue model. It remains to be seen whether this distinction is linked to the personalization of courts.

Herschel Vespasian Johnson (1812-1880) was an American politician. He was the 41st governor of Georgia from 1853 to 1857 and the Democratic Party’s running mate in the US presidential election of 1860.

His great-grandson (1894-1960), of the same name, was a foreign service officer and participated in United Nations foreign affairs.

When this great-grandfather was born, China was in the Jiaqing period (1796-1820) of the Qing dynasty (1644-1911). It is not certain whether the great-grandfather or great-grandson owned the vase, but this gives a feeling of confidence in the provenance of the object.

Some pieces from the great-grandson’s collection of ancient Chinese ceramics now belong to the Mint Museum in Charlotte, United States.

Sarah Belk Gambrell (1918-2020) was the daughter of department owner William Henry Belk. She served on the board of directors of Belk Stores during her career.

Sarah has also championed women and other marginalized groups nationwide, including her hometown of Charlotte. She has served on the National, New York and Charlotte boards of the Young Women’s Christian Association (YWCA) and has generously donated to the Mint Museum, the Carolina Opera and the Charlotte Philharmonic Orchestra, as well as to many cultural, educational, medical and social institutions.

An avid collector, Gambrell owned an extensive collection of important English and Continental porcelain. She died last year at the age of 102 and part of her collection has been released.

Doyle auction ‘ A Porcelain Vase Of European Figures From Partial Chinese Imperial Falangcai, was sold for a final price of US $ 2.45 million.

Falangcai porcelain vase with medallions containing various European flowers and figures and a pair of tubular handles was sold for HK $ 33.92 million (approximately US $ 4.36 million) at Sotheby’s Hong Kong in 2007.

The collection of the National Palace Museum in Taipei also has similar vases. – depicting two European ladies, a child and a pastoral scene.